Today I sit locked in a cell at Carlsten Fortress and write, because my story is about one of the prisoners. Yesterday felt great idea today I am a little hesitant. I with my wild imagination ... 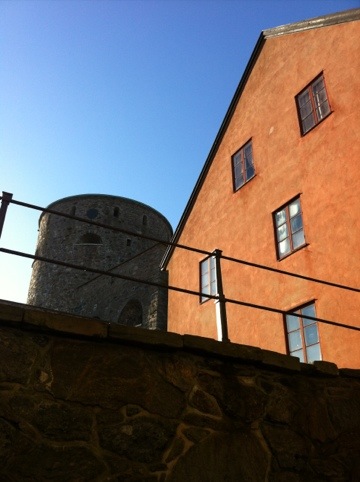 The story in my upcoming book Mercurium has really gone under the skin of me. Adel lady Metta Fock born Ridder Bjelke accused in 1802 of MURDER BY POISON on two of the family's four children and her husband. But Metta is sharp and defends itself with flying colors during the trials that follow, perhaps she is even too good in the end you just want to force a confession out of her. To accelerate this deprives her husband every opportunity to defend himself. She may not meet someone, do not use a pen and paper and therefore can not write any appeal.
But she hand-work and embroidery (!) A request for clemency. As the only woman ever put her on Carl fortress at Marstrand, where she gradually breaks down the insulation ...
I do not want to tell the whole story here but it has been struggling to write this time. Therefore, it felt so amazing when my good friend and genealogists Bridget found living relatives of Metta. Barely I thought it was true. For a long time I sat with the phone number of a certain Cecilia before I finally rang. Metta is namely Cecilia's grandmother's grandmother's grandmother, which she did not know.
Last Friday I was in Stockholm and finally got a face to Cecilia and together we saw Mettas clemency currently on the Nordic Museum. Some days will probably always remember and this was definitely one of them.

Thank objects Berit Eldvik curator at the Nordic Museum who showed us clemency and stands next to Cecilia on the image. 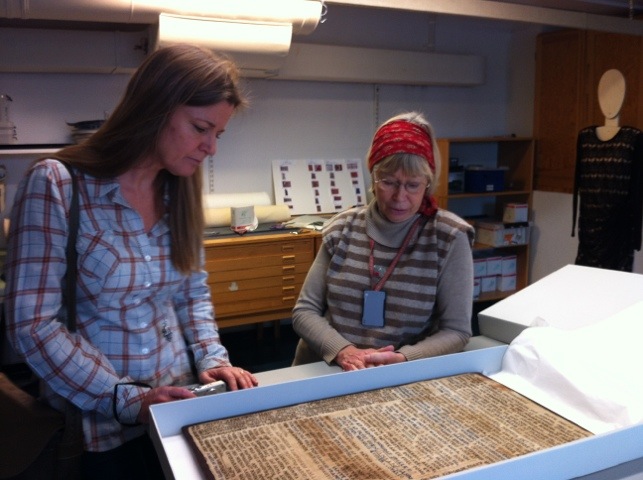 Mercurium becomes the title of the book, the fourth It is the old word for arsenic ...

Here's what the script out right now - spread out over the kitchen table. Oh yes there is a system in it. Green A4 paper, for example, means that there is a piece of past history there.
Yes, it's just to continue! 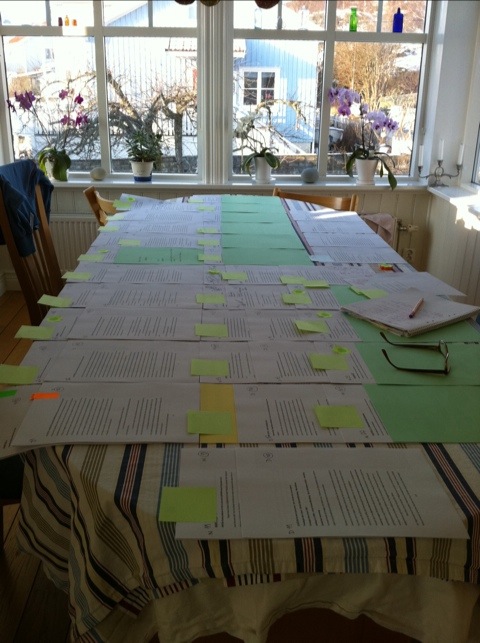 Nice German readers who late me a gift alongwith two books That They asked me to sign. 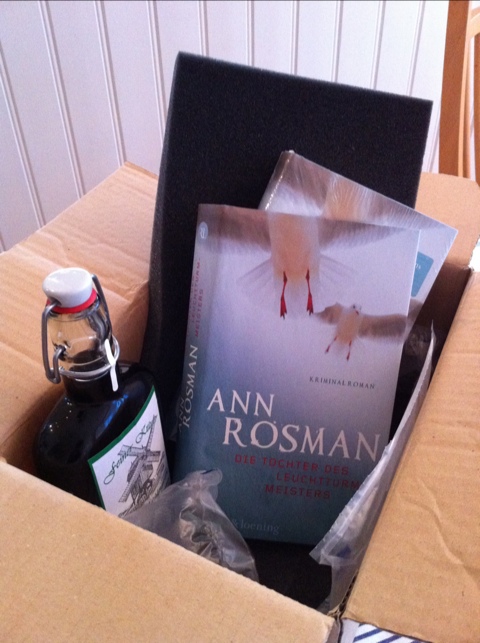 Summer is over, the Book Fair as well. Thanks for the nice, fun meetings in conjunction with the exhibition. And thanks for all the lovely comments that you leave here on my side - it gives me extra energy.

Now I sit here again, and yes, I should update the site more often, but I write, and my entire focus is on the story, book 4th

Although I know the story I want to tell you, it has been slow in the beginning. I could not remember that it was so slow recently, so I looked in my old notebook of "Porto Franco guardian" and realized that some it takes a while for the story to find their way. When you look back see the road as straight and obvious out but it's not when you sit there and write. Although there is a plan so that unexpected things happen and even though you yourself created the characters as they take liberties sometimes not at all expected.
I began research in earnest in March. Walked around with Commandant Eiwe Svanberg up on Carl's Fortress. Crawled in the aisles and let the light from inadequate flashlights shine our way, as electricity refused to work. And I who is afraid of the dark and all.

Living fate that I want to tell you about has been with me for quite a while. One person I often go and think even though she has been dead for over 200 years.
A woman, in the midst of all the men inside Carlsten. Isolated and locked up without any contact with the other prisoners and the outside world. Every time I open the gate to the commander's house where she and the other noble prisoners were detained I cry
"Hello everyone here I come!" Just to warn them. And maybe even prepare myself in an attempt to curb my hopelessly wild imagination. Actually, I would not be particularly surprised if someone in the elderly clothes stepped forward and greeted me and asked what I was doing there. If I had not died in the process.

Something happens to me when I get inside Carlstens walls. I wonder if there is singing, cry and memories left behind after all those sitting there. Or at least someone? If you put your head really close to the stone wall. Should not it do that?
I nod and whisper "God's peace" or just "Hello" in a corner at the end of the long time where several people saw a soldier stand. Goes so quiet I can and take a breather on the other side, grateful that no one laid a gnarled hand on my shoulder.

History is never farther away than it really? Not further than our memories and thoughts. The rain patters against the window and apple tree's branches reaching for the sky, waving in the wind while I write on.